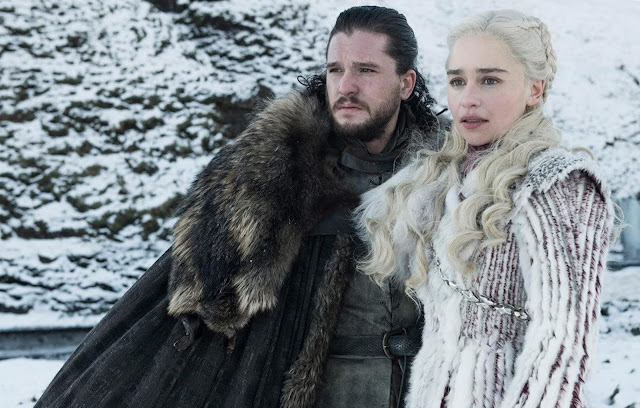 Game of Thrones Season 8 Episode 1 - Winterfell
The Great War has come, the Wall has fallen and the Night King's army of the dead marches towards Westeros. The end is here, but who will take the Iron Throne?
Game of Thrones finally returned in the eighth season in the first episode entitled "Winterfell". Game of Thrones fans certainly look forward to the continuation of the story of this series, especially last season ended with a collaboration agreement between the three main characters namely Daenerys, Jon Snow and Cersei to fight the king of the white walker, Night King. This episode can be said to successfully answer the enthusiasm of its fans and become a setup for the coming big war.

An army stretching to the horizon marches into Winterfell A young boy scrambles to look. Arya smiles watching with the commoners. Jon Snow and Daenerys ride together. Arya grimaces seeing the Hound, then sees Gendry. Tyrion and Varys ride a stage coach. Grey Worm and Missandei ride side by side. The two dragons make a low pass stunning the northerners. Sansa watches from high on the ramparts.

Jon greets an impassive Bran, then hugs Sansa, he asks for Arya. He introduces Daenerys to Sansa and the other nobles. Bran warns everyone the dead are marching south.

At a War Council the young Lord Umber says he needs more horses. The plan is to retreat all forces to Winterfell. Lady Mormont seems peeved Jon is no longer King of the North. He stresses he chose to protect the North and not his Crown. Tyrion steps up to praise Jon and says even the Lannisters are coming, to jeers. Sansa wonders about how to feed the armies, and the dragons.

Gendry helps unload meager supplies. Tyrion goes to Sansa on a mezzanine and congratulates her. They haven't spoken since Joffrey's wedding. Sansa teases him about trusting his sister Cersei and doesn't expect the Lannisters to arrive.

Arya meets Jon by the red tree, they hug. She shows him the Needle, he shows his sword. Arya says Sansa is the smartest one who doesn't like Daenerys.

In King's Landing Qyburn tells Cersei the dead have broken through, she offers only a terse "good" in reply. At sea a large fleet approaches the Capital, Euron goes to see his niece Yara tied to a mast, he said he plans to f*** the Queen.

Euron and a Leader of the Golden Company say they brought 18, 000 men, 2,000 horses but no elephants. Euron wants a private meeting, Cersei relents and allows him to her chambers.

Bronn is getting it on with three whores. Qyburn interrupts them to offer Bronn a deal to kill Jaime and Tyrion on behalf of Cersei. Qyburn gives a crossbow.

After sex, Euron dresses and wonders how he compares in bed to Cersei's other lovers. She likes his arrogance but dismisses him.

In the harbor a gang assaults a ship, killing the guards. Theon unties his sister, she knocks him to the floor to,remind him she's the boss. They leave with three ships. Yara wants to go the the Iron Islands but Theon is released to go help the Starks.

The Karstarks arrive at Winterfell. Davos, Tyrion and Varys discuss who will rule the 7 kingdoms if they survive. The three note Jon and Daenerys will decide.

Daenerys tells Jon she wants Sansa to respect her, a guard comes to report on the dragons eating. The beasts don't like the cold North. Dany tells Jon to saddle up and ride a dragon. The two take off, Jon hanging on for dear life then getting the hang of it. After a short flight swooping and diving they land by a majestic waterfall. They dismount, and kiss while the dragons glare at Jon.

Sansa has a bad message, House Glover is not coming. She argues with Jon why he renounced his crown, he says Daenerys will be a good Queen.

Jorah and Daenerys meet Samwell Tarly, she thanks him for saving Jorah. As a reward he wants a pardon for borrowing Citadel books and taking the Tarly sword. Daenerys gives him the bad news she had the Tarly's killed for not bending a knee. Sam weeps and excuses himself. In the courtyard he sees Bran staring at him. Bran says they have to tell Jon the truth now.

In the catacombs Jon blows out candles, Sam approaches clumsily. They greet each other, Jon didn't know about the Tarly's but says he is sorry. Sam stresses Jon has before and would have shown mercy. Sam then explains Jon's parents are Rhaegar Targaryen and Liana Stark, he is not a bastard at all. Ned Stark protected Jon for his sister as King Robert would have killed him. Jon's real name is Aegon and is the rightful heir to the Throne

A group of men walk through the remains of House Umber, Tormund, Beric Dondarrion and a few others meet up with the Night Watch led by Eddison Tollett. The Night King has left a warning symbol, young Lord Umber pinned to a wall surrounded by severed limbs in a spiral pattern. Beric torches the boy as he screams out, the pattern burns brightly. The men will double up on horses to try and get to Winterfell before the Wights.

Jaime Lannister arrives at Winterfell alone. Bran is there and stares at him.

Download Game of Thrones Season 8 Episode #1 2019 by the link below: